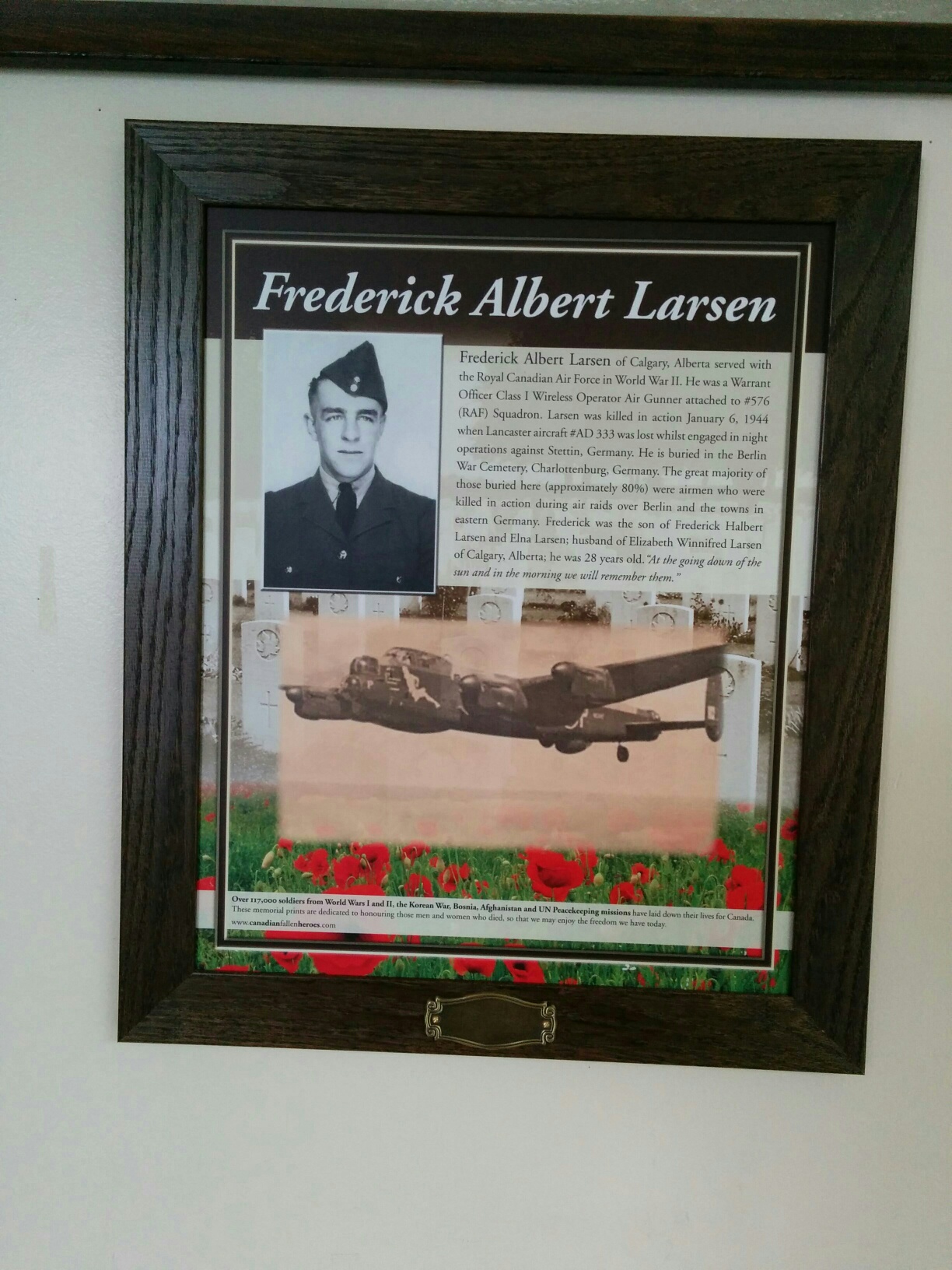 After my aunt June told me of the memorial to my father, Fredrick Larsen, on the wall of the Canadian Legion Hall #284, I visited the Legion to see for myself.  Discussions within the family further fueled interest in my father’s life and especially his military service in WW II.  My cousin, Peter Larsen, shared a letter that my Father had sent to his brother, Clarence.  Without that letter I would have not known so much of my father’s story.  The letter tells of surviving wounds while on a mission over Bremen, Germany about November 5th, 1942.  The letter relates, what I feel were heroic, actions to save other crew members, complete the mission and get the stricken aircraft home.  After recovering from life threatening wounds, Fredrick returned to fly again.  Hinting at the horrors of war he had witnessed and fully knowing the dangers, he returned to the war.  From the letter I learned what a brave, fearless and heroic life he led in defense of Canada and the world.  Fredrick died on January 6th, 1944 in a mission over Stettin, Germany.  He is buried in the Berlin War Cemetery.

Below is the letter written by Fredrick Larsen to his Brother, Clarence.

I received your letter and two airgraphs.  The airgraphs took 10 to 14 days pretty quick eh.  I haven't seen anything like that over here otherwise our letter would come and go a lot faster.  I'm sorry I didn't write a bit sooner but I have been busy up until we ran into a bit of tough luck.

The other night we started out for Bremen and just as we were getting close to the target a bandit came from nowhere.  It killed our rear gunner he was like a sieve.  The navigator got one up through his hip and the bullet lodged in his kidney.  They had to remove his kidney hes still pretty sick but I think he will live now.  I got a cannon bullet through my thigh.  And that ain't no mosquito bite and a shell splinter in the back of my leg.  They haven't touched it yet they happened to the same leg.  Luckily the bone wasn't smashed just a nasty flesh wound.  I would have bleed to death before I got back if I hadn't pulled my flying clothes off and cut what was left of my pants leg off.  Then I tied the wound up as best I could it stopped most of the blood flowing.  But before I could do this I had to crawl up and let the

front gunner out of his turret.  The pilot had yelled to jump but nobody heard him because the blast had cut the intercom when I got up along side the pilot the plane was burning in front of him but he wasn't hurt only had his eye lashes & eye brows burnt where his oxygen mask & helmet didn't cover  He wanted me to go back and get the fire extinguisher but I told him I was going to get Jack out of the turret first.  I knew Jack couldn't get out himself and the plane didn't seem to be burning very fast.  So I crawled up and got the front gunner out.  He was also wounded.  When he came crawling back his face was covered in blood.  He had a patch of skin off his forehead and he had got hit in the chest by a bullet but he was carrying a tin of rations inside his battle dress over his heart and it turned the bullet enough so that it just nipped his chest & ribs and both his feet was full of splinters but he was the least hurt so he helped the pilot navigate the plane home.  When I opened the front bulkhead door the air rushed in and blew the fire out or what ever it was nobody seems to be quite sure.  Anyhow the kite was still ok so we

dropped our bombs and headed for home its a good thing we didn't have to jump because the navigators parachute had a cannon ball right through the center of it.  Its alright we can sit back and laugh about it now but by Jesus it ain't no fun when it happens.  I'm glad I'm not laying in a german hospital with a leg like I've got.  And if I had jumped I should probably have bled to death because I would have been to weak to stop the blood after I hit the ground  This is sure a damned poor business and I hope you never get mixed up in it.

If I were to tell you what happened to most of my chums they'ed censor it out.

Well I'm glad to hear your getting along so well and you sure are lucky being stationed right there at home.  Well best of luck to you kid and watch your step and if you sent that parcel I asked for I hope you had brains enough to put a phoney bill of laiden on it.  Never put anything any good on the outside because they will steal it every time.  So long kid.

P.S. I haven't got a parcel through since March.